had running while pregnant.The reason for this reminiscing moment is because I recently had another Running Form gait analysis completed in order to identify some of the struggles I have encountered on this postpartum journey.

October of 2015, I raced my first decent half marathon in nearly a decade, but shortly after that my body broke down a little(minor injury). I took some time to rewind and refocus on areas I needed to improve. At the time, I had been going to physical therapy where I incorporated a ton of strength training, all while maintaining about 15 -20 miles of running each week and several hours of cross training. I was coming back from a little lower leg setback, so I was not in super great running shape, but I just knew something was off.

What do you know, a pregnancy test revealed I was pregnant. About 4-6 weeks pregnant.

James and I knew we wanted a family and we were planning on the year of 2016 being the start of this pursuit, but we did not plan on it happening so fast. The plan was to not slow down on my training, If it happened it happened and if it didn’t we would try again another time. We had about an 18 month window for a pregnancy to take place. This is because I have dreams and goals of my own and a pregnancy would get in the way of me accomplishing my goals. It’s hard enough to train for half marathons and full marathons. Also, getting an Olympic Trials Qualifying Standard would pretty much be impossible if I got pregnant at the wrong time. Hence the reason for the “perfect” window. I am truly grateful my body allowed me to get pregnant as easily as I did. It was definitely a blessing.

I was about 6 weeks pregnant when I sa the blue plus sign. Honestly I slowed down my intensity a little pretty much immediately. It was my first pregnancy and I had no idea what to expect. It was important for me to take care of myself and to just have fun running. I knew I would be able to come back better if I did not overdo it while pregnant. I have had plenty of injuries in my past, so I figured this was a perfect opportunity to just slow down a little.
I averaged about 35- 40 miles per week through most of my pregnancy. There were a few mornings the nausea was pretty bad. This is gross but I would just do my business, then head out for a run. Once the nausea went away, which was around week 17, running felt much better. But once again, I did not see a point to go crazy with running. I just wanted to have fun and experience running while pregnant. For the next 20 weeks my mileage slowly decreased to about 20-25 miles per week. As Augie grew I became more uncomfortable, so as the miles decreased the swimming increased. There was just lots of pressure in all the wrong areas. By the beginning of October I was just too uncomfortable to run, so I swam an hour a day…. Swimming was actually pretty fun while pregnant. 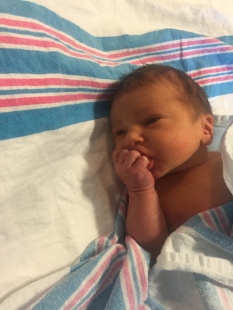 nal cephalic rotation at week 38. This technique was extremely painful. Looking back if I ever went through this again I think I would not even attempt the rotation. It was very scary. After the unsuccessful attempt we settled on scheduling a c- section at week 39. My doctors told me I would be able to recover much better if I avoided going into labor. I am not gonna lie, I liked the sound of that. I also did not 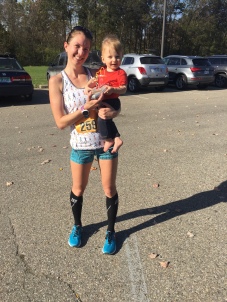 want to get to the point where we would hope he would rotate on his own during labor, because if he did not rotate, then I would have to have an emergency c-section. I am definitely happy with the choices we made. It is what worked for us. A c-section was not what I was expecting 9 months earlier, but a happy healthy baby is all that mattered. The past 16 months have been a journey. Bouncing back into running post baby has had its up and downs, but I wouldn’t change one thing about our story.